This band was occur since 1982 as the same year I born. I get to knew them in the year of 2003. I still remeber one of my colleague borrow me the Mp3 of X-Japan CD. It was quite awful when I starting to hear thier music but no choicelah coz my work place PC crash so have to format all over again and my mp3 all gone. I am so addicted to Japanese song although I dunno what the hell they are singing. So this were the first Japanese Heavy Metal band I have heard.

There were the 1st Japanese Heavy Metal Band in Japan. Very classical band with Benimaru(KOF) hair style, I am still wondering how they made thier hair stand like that.

I dunno what is the reason they make me so addicted to thier music and yet thier music have been already 20 years already. Maybe is because the fast rythm of the music make me crazy about it song such as Blue Blood, rusty nails, jealousy and Dahlia. And they also have ballad such as Endless rain, Forever Love and Longing.

X Japan were one of the first visual bands in Japan and also one of the most popular. They started in teh mid-80’s with the union of school friends Yoshiki (drums and piano) and Toshi (lead vocals). After that the joined with a couple other guys and formed the band X.

They released the two singles ‘I’ll kill you’ and ‘Orgasm’ and made it on two compilations albums with other Japanese newcomer bands. At that time Pata (guitar) and Taiji (bass) joined the band.

In 1988 they made their first album ‘Vanishing Vision’ and hired a second guitarist, hide. The album was released on Yoshikis new record label Extasy. It was a great success and they changed to Sony records. More albums (‘Blue Blood’ and ‘Jealousy’) and more touring.

With Jealousy they tried to come out in America, but no one there wanted visual bands. They renamed the band in X Japan because in America there was already a band called X. The band had great success in Japan and the members also made solo projects.

At this time Taiji (bass) left the band and was replace with Heath. Yoshiki wrote the 23 minutes long song ‘Art of life’ which was the first record on their new label Atlantic Records.

In 1996 finally came their last album ‘Dahlia’. In the spring of 1997 Toshi (vocals) decided to quit the band for ‘artistic and religous reasons’, so they announced their disbanding in September 1997. They made a final Goodbye concert in December.

The members made different solo projects. In 1998 a tragedy happened, hide commited suicide for unknown reasons. The fans were shocked. Yoshiki draw back from public.

In 2000 he started a comeback with his project Violet UK…

source from this site http://www.x-japan.de/main.htm

These guys are the godfathers of jrock, so even if you don’t like their style, they still demand respect. Without X, there would be NO jrock. Hell, American music would certainly be affected in more ways than one.

It was so sad one of thier member has pass away(Hide) and so thier band also break of as well . Bye …..Legend of J-rock. 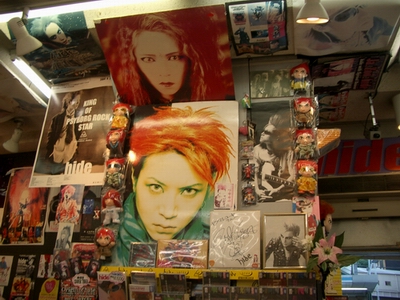